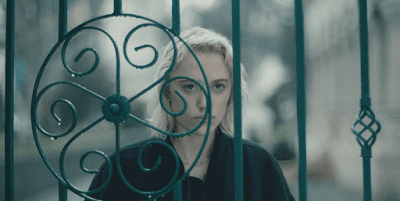 The one and only Liz Whittemore from Reel News Daily is back with a look at the Sundance thriller WATCHER.

Maika Monroe has solidified herself as a genre darling. If you somehow missed her It Follows or Villains, she’s a captivating performer. In Watcher writer-director, Chloe Okuno introduces us to a young couple’s international move to Bucharest takes a terrifying turn. A string of local murders haunts Julia as she spends her days alone and becomes aware of a neighbor staring at her from his apartment each night. Watcher takes you on a journey of cultural clash, instinct, and terror.

The film echoes the ingrained fear that women endure daily. We constantly live in a heightened state of awareness and anxiety that is exhausting. But it’s not only that aspect; it’s the gaslighting that might be more impactful than anything else and, its ensuing isolation can feel all-consuming. Monroe is in almost every frame. Her mindset will be all too familiar for the female audience. The sense that someone is a bit too close, looking at you a moment too long, and in many cases, we are helpless. What Monroe brings bravery to Julia that allows the viewer to be cautiously optimistic about her safety. Okuno and Zach Ford‘s script gives her a sense of action while maintaining fragility. It’s the moments of courage that we get to root for while simultaneously biting our nails. It’s a beautiful balance. Benjamin Kirk Nielsen‘s cinematography combined with Okuno’s blocking also put the viewer in Julia’s state of peril. Accompanied by a string-heavy score is everything we need it to be. The emotional manipulation in this film is sheer brilliance. While it’s not necessarily a new storyline, it is the bold approach that sets it apart. Watcher will have you maniacally screaming at the screen in terror and frustration. Sundance audiences are in for a ride.