Midnight Swim (2014) is being rereleased on home video today Odd mix of documentary, found footage and psychological thriller/horror film is going to be a like it or lump it proposition.  To be completely honest I don't know what I think of the film. I do know that this film will probably click best with those who are patient and willing to go with it.

The film follows three sisters who return home after the disappearance/death of their mother. She had gone swimming in a lake near her home and never surfaced again. The three girls are there to settle their mother's affairs and to try and make sense of what happened. As they reconnect with each other and the people in the town the family fragments as weird things begin to happen.

Told in a largely POV manner, one of the girls is shooting a documentary, MIDNIGHT SWIM tries very hard to put us into the action. We are there with the girls seeing what they see. The film looks spectacular, for what it is, with all of the shots neatly composed....which is the problem. The film staggers the fine line between "documentary" and fiction film to the point it never feels real either as a fiction film or a documentary. I know the effect is used to make the film unsettling, and it is the film has boatloads of anxiety, but there really isn't a pay off.

The film is painfully low key and I know I would have been more receptive to the film had I seen the film in a theater instead of as an online screener at home. There is lots of talk, some pretty images and some weird happenings and it all unravels at a snails pace. Watching it I kept looking past the screen and fumbling with my note pad which I filled with doodles. I was interested in where it was going since I stayed to the end, but I couldn't believe it was taking so long to get there. As I said had I been in a theater I would have been more receptive, but at home I kept finding other things to do.

Is it bad? No it's not. Its looks great, generates the right sort of anxiety, it just doesn't really go anywhere scary,which was how I felt when I got to the end. It was kind of like, "oh". To me the film reminded me of a number of other found footage/POV films of recent and semi-recent vintage which kept you watching interested to various degrees but petered out at the end, THE LAST BROADCAST in particular.

The film hit VOD and theaters on Friday. 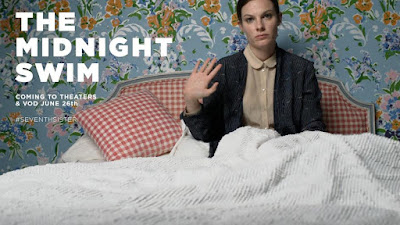