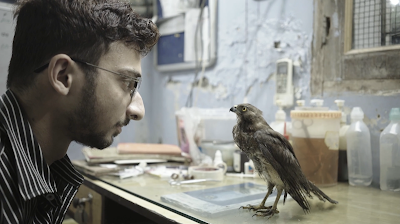 ALL THAT BREATHES is a beautiful film. The film is the story of  brothers who care for kites, hawk like birds that are all over India, and specifically in New Delhi. They have taken to carrying for the birds full time with their jobs taking a back seat.

The film is largely about brothers Saad and Nadeemmwho takes care of the birds. Yes the film is also about the birds, but at the same time the brothers are always on screen. Through them we get a sense of what it’s like to live in a city where the pollution is so bad the birds are falling ot of the sky. It is a look at climate change on a small scale that makes it more real  than many films that speak of larger scale changes. More importantly we get a wonderful sense of the brothers and their passion. It's the sort of thing that makes us love in the birds ourselves.

I have to say that the film contains one of the most amazing things I’ve seen on film. As one of the brother is walking on a roof a bird flies by and faster than you can react and it steals his glasses off his face. I stared at the screen confused because I thought he had glasses. He then says, yes the bird stole his glasses and flew off. I was so shocked that I had to go back and rewatch the sequence several times.

This film is also stunningly beautiful. It’s a film of such beauty that it makes rats and flies look amazing.

I really loved this film a great deal. Sure some may not like the pacing which can be a tad leisurely, but for me it was perfectly paced since it put me in another place.