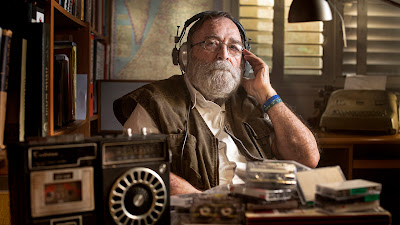 Two weeks before the world premiere I saw the first great film of 2022 and this is it.

Destined to be argued about for years, I am hoping it plays the New York Film Festival in a post Covid world so I can watch the  fireworks of the post screening discussion.

The film is the discussion of what happened in Tantura in Palestine during the Israeli War of Independence. Officially the Palestinians left of their on accord, though many people, including the people who committed the murders, say a massacre happened.

In an age of spin this is a tale that has been spinning for seven decades. This is the story of a lot of people knowing the truth and but pretending it isn't true. It is a tale where people will gladly tell you what they did  and saw and then say these things never happened. Graduate student Teddy Katz recorded over 140 hours of interviews of the stories and wrote a paper laying out what happened. He was then hounded, as academia and the courts tried to silence him.

The trouble is that in investigating the stories director Alon Schwarz found many of the people interviewed told him the same stories.

This film kicked me in the chest. Not just because its a hell of a story but also because I was trained with an eye toward being a historian. I wanted to do exactly what Teddy Katz did. I wanted to collect stories and tell them. I, unfortunately, went in another direction.

What I love about the film is that in addition to telling the story that Katz pieces together, Schwarz also attempts to explain  why the people of the town  and the Israeli establishment wants the story buried. While some of it has to do with shame, a large part of it  has to do with the fact that some of what was done to the Palestinians mirrored what was done to the Jews in Europe a short time before. As we see in the film, newspapers of the time bent over backwards to explain why this was different than what happened in Second World War.

Schwarz also talks to officials and academics who were against Katz telling his tale. They want a nice and neat past free of messiness.  In the process he introduces us to Yoav Gelber, a professor who has no good words for Katz. He was in the university where Katz was a student and wanted the story to go away. Gelber is hands down the absolute worst historian and academic I have ever run across.  Denying out right  that anything happened and laughing at the suggestion (no, really he finds this funny) he refuses to even look at the evidence.  Never mind that there are hundreds of hours of recorded interviews he totally dismisses all eyewitness testimony as unreliable. While eyewitness accounts can be suspect because of being in the moment, point of view and other factors, it is always vital since it is often only what you have to work with and can steer you toward the hard evidence. Gleber's uselessness as a man of learning completely falls off the table when he says that looking for a mass grave is pointless. Its at this point he goes from a bad historian to the worst. Worse than people who look at evidence and either dismiss it or misinterpret it since they at least looked things over Gelber won't even do that.

What gives this film weight is the clear illustration of the disconnect we humans have. Yes these things happened. Yes people are proud of them, but at the same time they deny they had any part in the events or that the events were as bad as they were. Watch the panel interview with the elderly members of the community who vaguely acknowledge something might have happened but shut down any talk of finding out for certain as if knowing the truth with destroy their reality.

By the time the film ended I was deeply troubled. TANTURA had given me food for thought about many things including our troubled present. If you need a modern parallel look no further than the events of January 6, 2021 when a coup was attempted and now people are trying to retrocon events of it being something else while at the same time telling how proud they were to be trying to over throw a democracy by force.

TANTURA is a great film and easily one destined to be one of the truly best films of 2022.