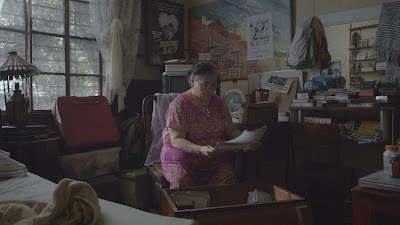 Leonor is an older woman who can't pay her bills. Her plan to sell an old script to a movie producer goes awry when she is clonked on the head by a TV and put into a coma. As her family deals with her medical issues she is living her script for real.

One of a kind movie that mashes together genres into a film that is unlike any other, If you want a film that isn't Hollywood but is entertaining look no further. This is one crazy film that mixes drama comedy and 1980's action films into a story that grabs you and pulls you along.

I don't know how to discss this film. Then again I don't know if I should. The film is just starting out on it's journey to get to your screen and I don't want to take the specialness of it away by telling you everything. I say this because I'm prety certain this is going to hit a number of festivals in the coming months.

I will say that some of this doesn't work. I was a bit lost at times,on the other hand the film is so good that the bumps don't matter.

Recommended, especially if you like off Hollywood one of a kind gems.