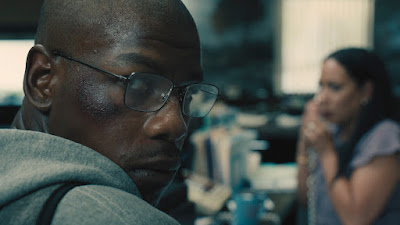 John Boyega firmly becomes the leading man everyone knew he was in the true story of  Brian Brown-Easley who took over a bank claiming that he had a bomb because he needed someone to listen to him about his situation and needed to get the $892 owed him by the government by the veterans adminstration. Its a heart breaking tale that will crush you.
While I could quibble with things in the film, indeed I did not instantly connect to the film because the film seems destined to be another man angry at the sytem tale that Hollywood cranks out with regularity. However about ten minutes in Boyega suddenly opens up and we will follow him everywhere.  You can forget any notion of Hollywood cliche, Boyega wipes it away with a performance that really should be the the first locked and loaded Oscar nominee.
In all serious this is a performnce for the ages. Never mind the Michael Caine saying if you can act ith your eyes you have it, the truth of the matter is Boyega is Brown-Easly with every fiber of his body. He bounces from manic, to loving to broken on a dime, often with in one scene. He bleeds humanity off the screen as we feel his desperation  bleed off the screen while at the same time we want to give him a hug as he treats the hostages with care and takes meaasgae from bank clients wanting to speak to a representive. It may sound funny but it transcends expectations and draws us in becase it doesn't feel like a stunt but something Brown-Easley would have done.
Equally wonderful are Olivia Washington,  Selenis Leyva and Nicole Beharie as the tellers and Brown-Easley's ex-wife and Michael K Williams as the hostage negotiator who genuinely wants to help the deperate Brown-Easley.  They all are so good that you will wish we got to know them more.
The film also scores points looking at the official bullshit  (including racism) that caused Brown-Easley's life to implode and the hostage situation to end as it did. There is enough here to make us incredibly angry, though the fleeting reference to why the payment check got redirected, should either have been cut or expanded slighly so it didn't feel added in (it's the one moment that felt off)
This film is a stunner. Easily one of the best dilms at the 2022 SUndance film festival it rocked me to the point that I had to go out and walk the dog just to clear my head
Highly recommended
Posted by Steve Kopian at January 21, 2022