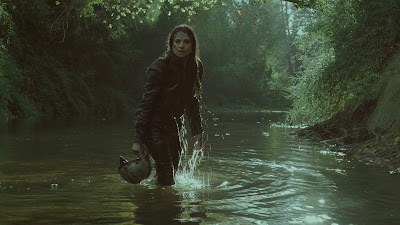 A mother takes her kids back to the dairy far she grew up on after her father claims he saw her dead mother outside a cellphone shop. Her mother had died years before so she thinks something is wrong. The truth is that the mother has crawled out of a river walked toward home.

This is a magical realism infused film nominally about man's destruction of the planet. The village by the farm is up in arms because the pulp plant is killing the fish in the river the town depends upon. There are also some ther strange things afoot such as the animls seeming to sing.

This rambling film never generates much interest because things take a bit too long to get going. I sat their wondering when things would come together but by the time they did I was largely disinterested.  I kept wishing that everything in the film was pushed aside and we simply focused entirely on the main character's trans daughter quest for acceptance.

This was a miss for me.