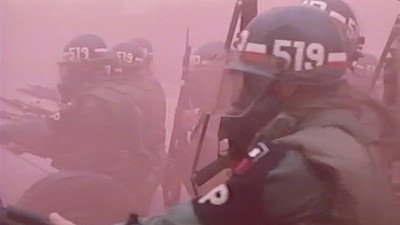 RIOTSVILLE,USA is an odd duck film. A mix of documentary and essay it gives me a lot to chew on but by the time it  was done I wasn’t sure I wanted to.

The film is a look at America through the lens of civil unrest in the 1960’s. As the country exploded in riots the Federal government set up a commission to study it and a fake town in order to train the military as to how to handle social unrest. We watch footage shot in the town by the government which is intercut with TV footage  of news broadcasts and stories. There is voice over commentary and on screen text relating facts.

While the film is very much trying to discuss  the inequality in America and how that lead to unrest there is a point where the film kind of runs out of steam.  The  discussion and footage kind of repeats and until the film gets toward the end with a brief plea for a new Harlem, the film largely stalls with the need for the film to be stretched to feature length working against it.

While not bad I was disappointed