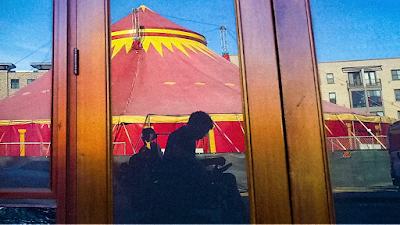 Disabled person Reid Davenport tries to make a film about how he sees the world and how it sees him.
Nominally this should be a vital and important film since it's vital that we understand how different people with different abilities see the world. How can we understand the world if we don't get a chance to walk in someone else's shoes? And while the film is full of Davenport going out in the world and talking about how he views the world the film grinds alost instantly to a dead stop.
The reason that the film quickly falls apart as whole sequences play out with the camera looking at the ground, straight up in the sky or at an odd angle that shows us nothing. Why is the camera aimed as it is? I don't know since Davenport talks about getting a new camera that he can use himself so I'm not sure why he aims the camera as he does. I say this because Davenport is mobile and able to get around. If he is going around he is not looking at the ground and he is not staring at the sky because he can not navigate that way.
The film also doesn't really show him interacting with anyone other than his family, a friend and crew on a plane. This is fine but we really don't get any real sense of what it is like to be him. It's not enough to justify a feature length
A disappointment.
Posted by Steve Kopian at January 25, 2022