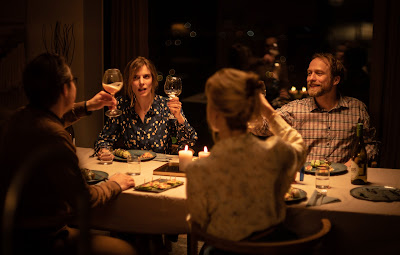 With so many films playing Sundance and because we have a desire to mix things up and have a discussion of the films playing Unseen Films, and Reel News Daily are cross posting reviews so that you get a broader view of  what's playing (and lessening or respective workloads). What follows is a piece written by Liz Whittmore the managing editor of Reel News Daily and a good friend of Unseen Films, of a film that truly messed her up.

After meeting on an Italian holiday, two young families spend a weekend together in the Dutch countryside. Cultural misunderstanding and language barriers aren't the only things creating tension, as guests become increasingly uncomfortable with their host family.

The ominous score puts your frame of mind into peril immediately. Performances across the board will have you hanging on every word. The sly dialogue combined with increasingly cringe-worthy behavior keeps your skin crawling and your pulse elevated every second of the film. You are humming with anticipation of something terrible. Speak No Evil is the epitome of psychological horror.

These people are not unfamiliar; the manipulation, the overly opinionated, the inappropriate, and overtly abusive. Boundaries are crossed and outright obliterated. As if that weren't enough, the ultimate reveal of this odd couple will absolutely terrify you. Speak No Evil's final third had me digging my nails into my palms so hard they almost drew blood. If that is not an endorsement, I don't know what is.