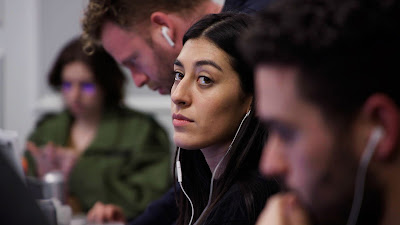 Good friend of Unseen Films Liz Whittemore, who normally writes for  Reel News Daily and I decided to pool our resources and share our coverage of the Sundance film festival. The idea is to cover more films than we could alone, but also do dualing posts of multiple takes of some films so that you get more than one opinion. Films should be discussed and adding Liz to the discussion opens things up.

To The End shines a light on the young activist movement that must succeed for us to survive, quite literally. This film took what was essentially a talking point to the vast majority of the country and finally gave it faces and ideas that mean something. The documentary spans a timeframe from the 2018 election cycle, the beginning of COVID, Black Lives Matter marches, to the 2020 election, the Code Red report, and most recently, the Build Back Better legislation. It clearly illustrates the inadequacies in our government and their direct connection to climate. It's an inescapable reality for the audience.

Heavily featured are the Sunrise Movement and their behind-the-scenes grassroots machine. They are the future of the climate movement. We know who Greta Thunberg is. We can conjure her image instantly. To The End introduces us to new faces. Varshini Prakash, Alexandra Rojas, and Rhiana Gunn-Wright should be added to our visual catalog. Another strong female household name that is also a large part of the climate narrative and the film is Representative Alexandria Ocasio-Cortez. I must admit, I was incredibly impressed by AOC and her resolute stance. Living in Manhattan, I've watched her rise to prominence through the lens of the media. To The End was the first time I got to see her unfiltered. You will not walk away from this film without newfound respect.

The balance between performative politics and passionate change is a thin line. The open disdain for President Biden feels unproductive. It's comparative to 2016 with Hillary Vs. Bernie Bros. Quite frankly, it's borderline dangerous. Perhaps, this perspective has everything to do with my age and political exposure. I've worked on campaigns. I know how the legislative process works and how it doesn't. Do I wish President Biden would use the power of the Executive Order more? Absolutely. I share the frustration and understand the urgency. I am terrified as I witness the destruction of the Earth at such a rapid pace. I do not want my young children to grow up and think that I say idly by as my parents' generation has done for long enough. That is where the importance of To The End becomes crystal clear. There is a way forward through action and persistence, and the film is a successful blueprint on the real steps towards tangible progress. This passionate, up-and-coming generation of activists believes they can move the dial. I sure hope they do, for everyone's sake.

For more takes on Sundance as well as just great film writing go over to Reel News Daily and see what Liz and her cohorts have cooking.