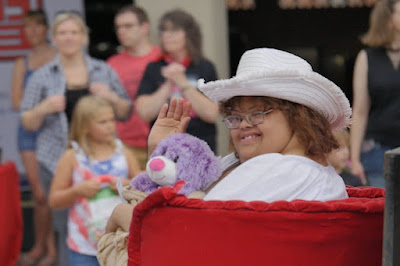 Jazmine Faries,is a 32-year old young woman with Downs Syndrome who writes and stars in plays that she wrote.

Wonderful portrait of a young woman and her life. This is not a typical this is what life is like for someone with a disability, rather it is the best of all things, a portrait of a kick ass young woman who you just want to know. Its a film that makes a case that we shouldn't be seeing people with disabilities as something other than just regular folk. By simply being and pushing forward Jazmine ends up bringing together all sorts of people.

The reason that the film works is simply that we just watching Jazmine and her family as if she as just another person. Yea she has Downs, but at the same time she isn't going to let that stop her she is just going to go straight a head doing what she does.