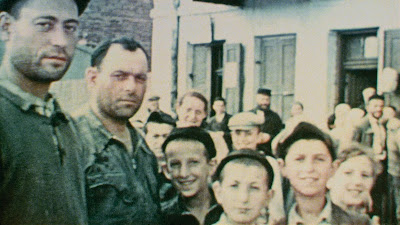 In 2009 Glenn Kurtz discovered some 16mm in a closet. Shot in the 1938 by by his grandfather when he visited Europe it is the only known  footage of the  town of Nasielsk in Poland. It is some of the few films of a Jewish population from before the was and one of the a very rare few films to do so in color.  Director Bianca Stigter took the three minutes of footage and constructed a 70 minute documentary about the quest to find out more about the town, the people on the film and their fate in the war.

This film kicks serious ass. If you every wanted to be a detective this film is for you. While the images are only the three minutes of film, the voice over is an hour long discussion of the quest to pull details from the images in order to be able to track down more information. An inquiry about what happened to a lion on a door to a temple results into the discovery of the story of a riot in the town some time before the filming. We learn that the film being put on the web resulted in finding the family of one of the boys seen in the film. Discoveries lead to other discoveries.

Most important by seeing the images over and over again the people in the film return to life, however fleetingly. More magically what are just images at the start become people we “know” by the end. The weight of their being presses into us. While we don’t get to know who most are they still become living and breathing people thanks to their being on the screen and Stigter’s slow reconstruction of the town and the time we are witnessing.

This is a moving film and highly recommended.