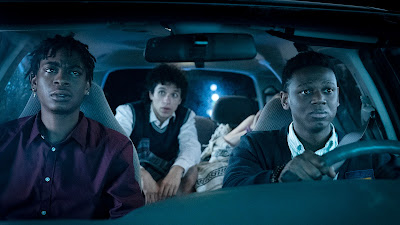 An expansion of director Carey Williams' short film, EMERGENCYis the story of two African American college students who plan on making a legendary run of frat parties. Complications ensue, before during dire when going home to change for the run they discover a white girl passed out in their living room. Uncertain what to do, they and their roomate who left the door unlocked, struggle to figure out what to do and keep themselves out of jail.

An uneasy mix of comedy and social drama this is one part a wild and crazy night style comedy mixed with very real social concerns. It makes for a lot of unconfortable laughs as tyical jokes of this style of comedy take on darker tones since the boys know there is a good chance that if they call for help they could end up dead from a "misunderstanding" on the part of the police. Its a clever spinning of things that occasionally clunks in moments like the white homeowners telling the black kids to get out of the neighborhood and stop selling frugs before going to to a house with a black lives matter sign outside. It's not that the moment isn't real, more that its low hanging laughs in a film that wants to be more.

While I like EMERGENCY, I don't love it. I admire what it is trying to do more than I love what it does. I love that spins things to make up think, but it doesn't always succeed, especially in an ending which, while right on target in many ways, doesn't actually hit it because of the tone.

Still, there is enough here to make the film worth seeing.