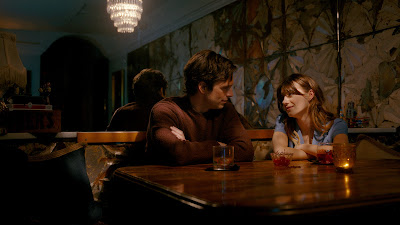 I have to do this review in two pieces. The first is going to be a no spoilery review and the second will have more details for those who don't care about spoilers

FRESH is the stoy of Noa, a young lady who is unlucky at love. She bemoans the fact to her friend that she can't meet anyone nice on line. She then meets Steve, a charming doctor in the supermarket. sparks fly and they are soon heading off to a quiet weekend getaway,where Steve reveals his appetites.

Without giving anything away this is a not bad little thriller that suffers from our having been here before and a pace that stretches things to almost two hours.

FRESH is a really well made film with great performances, I just wish that the script and the pacing was up to everything else.

No, wait I wish going in the promotional material didn't use the term "appitites" since it pretty much tells you someone is getting eaten. I suspect that the copywriter thought they were being clever, but the fact is it's not and coupled with the films love of food you know how this might go.

The real problem here is that after a leisurely first 35 minutes during which things are set up and we aren't quite sure where this is going to go, the film turns and suddenly we're in the "heroine is chained in a room genre" that has been done so many times that we can largely figure it out where it's going. I mean the filmmakers gave Noa a plucky friend who wasn't certin the trip was a good idea, so you know help is on the way. I felt no suspense while watching the film, other than curiosity about what condition the other trapped girl was going to be in.

It doesn't help that the film runs almost two hours for no really good reason other than to have some sequences play out to 80's songs in a "clever" way.  Despite what the film thinks it is not reinventing the wheel, and while entertaining it never really does anything to stand out from an over crowded subgenre.

While I freely admit the fact that I see way too many films, especially horror/thrillers, every year influenced my feelings for the film, I can't imagine anyone other than a non-horror film fan being over the moon about this film. (Additionally I also freely admit that the fact I had seen 30 Sundance films, before I got to this did influence my feelings)

Then again the cast  is so good that I could be wrong.

Ultimately worth a look for the curious.