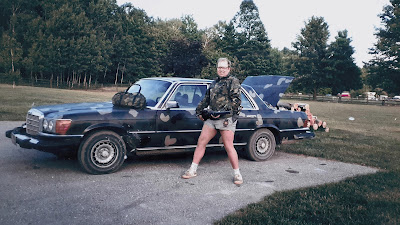 Portrait of Richard Davis who created the modern bulletproof vest and his company Second Chance. Davis is a man of contradictions with his actions putting just as many people in danger as he saved.
The legend is that Davis turnd to making bulletproof vests after several robberies and his pizza businesses went belly up. Developing a product that could stop a bullet and be light weight he sealed the deal by shooting himself repeatedly. However things turned dark as his crazier nature got him int trouble.
I don't particularly like Davis but I hav to admire his ability to keep going. Things happen and somehow he has largely been able to rise above the shit storm he creates. I was totally hooked by his tale and stared at the screen more intently than many other big titles at Sundance.  This is one of those films where you can't believe what you are seeing. Gtanted he got away with a lot of stuff because he was the big man in town but still...
You have to see this. Its a wild and crazy story that will keep you wondering how this guy isn't broke and in jail.
A must,
Posted by Steve Kopian at January 26, 2022