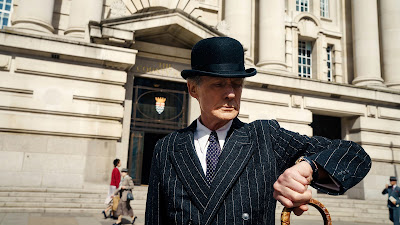 The only reason I watched LIVING was because I wanted to see Bill Nighy kick it ot of the park. I say this because I refuse to watch the source for the film, Akira Kurasoa's IKIRU ever again because it crushes me. Knowing the original I knew what I was in for and I still dove in.

LIVING is the tale of  an English official who discovers that he has six months to live...and realizes that he has never really done that. Spurred on by a young lady in his office he sets his sights on pushing through a project to build a playground.

If you ever were going to hope to come close to the original classic film you really had to set the film in post war England where things were still officious and rigid. The world that Nighy exists in is stifling and dead. There are rules just because and for no other reason, such as waiting a certain amount of time before following a superior. Nighy clearly has been crushed by decades in the trenches of the dead. As a result we feel his return to life  in the second half.

The problem for me with the film is it is wildly over produced. You can feel director Oliver Hermanus' hand in every detail. While I understand the need for the film to reflect the rigid nature of Nighy's existence the film never lets go. We always feel everything being perfectly stage managed to perfection. Even the soaring and heartbreakingly sad final shot is too perfect for words. I never felt I wasn't being manipulated to the nth degree. Yes, it creates one of the best looking, best directed  films in years but I never was fully connected because it was too fucking perfect.

Of course the real show here is Bill Nighy. He sells it all. We believe that life has crushed him, and yet we still feel his humanity and dignity, and we delight in his much too late found joy-even as it crushes us utterly. I would love to put Nighy in the Oscar mix for next year but I am fearful the film may disappear by then. Still we can hope.