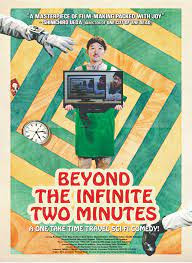 A man discovers he's able to communicate himself  two minutes into the future via video monitors. He soon has brought friends in and things begin to go all over the place as paradoxes appear.

This is a wild film. Funny in all the right ways it is also a mind melting film as the plot spins off in all sort of unexpected ways. I can't even begin to explain how it  goes, and even if I could I wouldn't want to because the real fun of this watching it go left and making you talk to the screen.

Trust me you just have to see this.

The most amazing thing about this film is it is essentially one take. The camera keeps moving during the whole running time without a cut. I'm in absolute awe because what it would take to do this with cuts would have been insane- but one take as a kind of live theater boggles the mind. After a certain point I was just talking to the screen wondering how...

I don't know and I don't care because this film is just is a blast and a half.