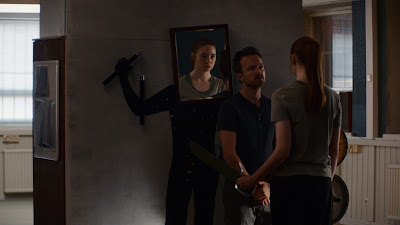 Set in a world where terminal people can get duplicates of themselves DUAL concerns a woman who is told that she has a terminal disease. She is told there is a 98% chance she is going to die, however the 2% chance of survival is the margin of error so death is certain. She opts to get a duplicate but she survives, which means she must now fight her clone to the death.

Mannered and low key comedy drama this is a film you are either going to love or hate. It’s not so much the that the story is bad, though there are too many questions about the world for it to fully make sense, rather the presentation is so deadpan and off kilter as to be annoying. For example, Sarah, Karen Gillan's character is not really affected by things until she  is. I mean he illness is discovered when she wakes up in a bed covered up by blood. She then goes to a clinic and tells them it’s not an emergency – until she vomits up a torrent of blood at which point the nurse dead pans “I thought you said it wasn’t an emergency”, as if it’s an off handed joke.  More off handed jokes follow that don’t produce laughs so much as cringes.

I just kind of stared at the screen wondering if I should be laughing or not, I knew the answer was I should be, but the presentation just didn’t work. I get what it was trying to do but it never pulled it off. It also doesn't help that the deadpan performances work against it. For exampl Gillan seems to be speaking in fast forward for no good reason.

If you like off kilter and mannered low key comedies try it, otherwise try something else.