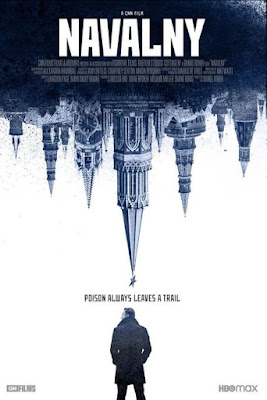 My final film for Sundance was  NAVALNY about the Russian opposition leader whom Putin had poisoned with a nerve toxin that if administered correctly shuts off all of your nerves, killing you in a way that looks like a natural death because it dissipates quickly from the body.  The film is an examination of the poisoning by various places including the excellent Bellingcat coupled with a look at Navalny’s career.

Coming into the film after several days of my friends talking it up, I was initially rather disappointed. The early part of the film was kind of dull and run of the mill. The film wasn’t doing anything bad, rather it was hitting a;; the typical points of a story like this. It wasn’t until the poisoning happened that the film clicked and we were off to the races as the story of trying to find a smoking gun link to Putin  gave a serious shot of adrenaline into the proceedings. Suddenly there was not only a mystery to be solved but also there was real danger to the proceedings because other than a stupid person can see clearly how evil Putin is.

I really liked this film a great deal. It’s a compelling story with a connection to current events (the Russian threatened invasion of Ukraine).  You really get a sense of how bad Putin is for his country and the world.

If I have any reservations is that watching the film it doesn’t always give us a entirely clear eyed picture of Navalny. The filmmakers clealry love him, and theree is no denying he’s at least a seeming better choice than Putin, but there are still questions about his past (links to ultranationalists) and he is a bit too smooth for me to entirely take the word of one film.

Reservations aside the film is highly recommended, if for no other reason than it’s a hell of a story.