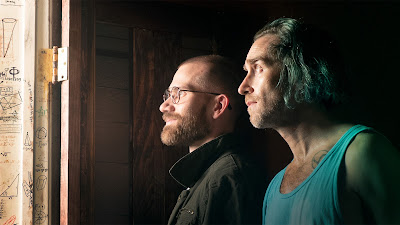 Aaron Moorhead and Justin Benson return with a film where they are everything in front of and behind the camera. Its a wild psuedo documentary (of sorts) about two guys who try to get to the bottom of the weird things going on in on of their apartments.
This may very well be Moorhead and Bensons best film. It's certanly as messy as their other films and in some ways it hold's together better than their other films. Its a film full of heady ideas, some brilliant and some crack pt. Its the sort of like hanging out late at night and talking with friends about all sorts of crazy stuff. I was  hooked because I really wanted to see where this was going and as a conspiracy/pranormal junkie from way back it as wickedly ccool how they wove all sorts of crazy things together into the story.
If thre is any real flaw it's that the running is about 120 minutes. Thats a lot of time to watch to guys talk about the mysteries of the universe and go in all sorts of weird directions, especially when most of the film is in one room. For what ever reason the film the film runs out of steam about three quarters of the way in.  Its not that the narrative collapses, it's just that there is so is so much here that we grow weary without a pause.
Exhustion aside I liked SOMETHING IN THE DIRT.
Aside note: In order to help fight piracy Sundance changed things up and made it so the film had to be watched a certain way on certain platforms. While I like the effort,  I hpe that next time Sundance works out the kinks since I know several people could not log in. I also had issues with the picture early on, and then I had the film lock up  toward the end.
Posted by Steve Kopian at January 26, 2022