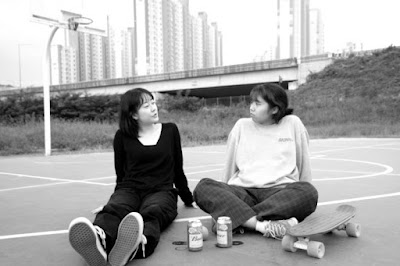 Bang Seung Hyeon' GOODAFTERNOON SWEET DREAM is a series of conversations beteen a girl named Ye Won and her friends.

Shot in black and white in a series of single takes the film looks and feels like a Hong Sang Soo film. Its a discussion of the lives and feelings of the characters where everything happens verbally.

And that's all I'm going to say. It's not that the film is good or bad, rather this is not my cup of tea. There is a reason I tend not to review Hong Sang Soo films which is my reaction to them is not the reaction of other audience members. While the film most certainly not bad, the film never connected ith me on a personal level in the same way that Sang Soo's films don't connect to me.

That said, if you are a fan of Hong Sang Soo, you may wish to give GOODAFTERNOON SWEET DREAM a try