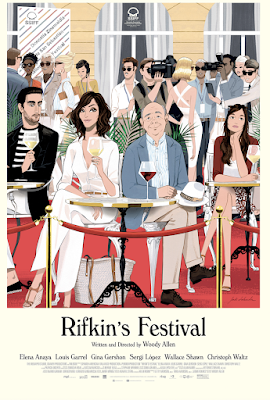 RIFKINS'S FESTIVAL was bitter sweet for me. This could be the last film Woody Allen will make. His years long battle concerning what happened with his daughter finally making it nigh impossible for him to find financing for his projects (though apparently he has a new film in the works). Never mind that his last few films have been terrible, with A RAINY DAY IN NEW YORK being an absolute disaster unconnected to reality. It is also a film that had Woody had a collaborator might have actually been a return of form.

The plot of the film has Wallace Shawn playing Rifkin, a one time film professor now frustrated novelist. He heads to the San Sebastian Film Festival with his wife Gina Gershon, who is doing the PR for a French actor with whom he suspects she is having an affair. While there he strikes up a friendship with a married therapist.

Playing like a summing up of Woody’s career the film has riffs and references to not only Woody’s earlier films but film itself. Rifkin is constantly seeing the world as if it was scenes from various films (for example Christoph Waltz shows up as Death in a riff on the Seventh Seal.). Its an odd mix of forms and styles with Woody’s early funny comedy crashing into  some of his mid-period more serio-comedies.  It some times works and sometimes doesn’t, more often than not the result of clashing styles, say a goofy joke in a more realistic moment.

The real problem here is in the writing. Woody has crafted some good sequences and monologues that are in need of shaping. Bits run on too long. Speeches need trimming. As I said above the tone with in scenes sometimes shifts uncomfortably.

While I was watching the film I was kind of shocked that the film actually feels like a Woody film from about 15 years ago. It’s a film that actually kind of (almost) works. There are these flashes of brilliance that made Allen’s films the toast of Hollywood for decades. Granted they are encapsulated in a film that is wildly imperfect, but it isn’t the absolute train wreck of his last few projects.  My biggest take away was that if someone took the script and gave it a once over you’d actually have a good film.

While the film isn’t perfect (Its clear Woody hasn’t been at a festival in years)it isn’t a complete waste. It’s the first Allen project in many years where I didn’t wonder how it got made.

Is t worth seeing?

For Woody Allen fans, yes. It’s a nice palette cleanse after the last few films. For me a life long fan of Woody it was nice to see that Woody hadn’t completely fallen off the table.  More importantly in a film that will probably be his last hurrah it’s a nice summing up. It’s a nice end to a career. If nothing else it has Woody fading out while standing on his feet instead of on his knees