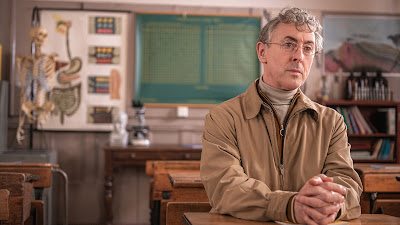 This is the story of "Brandon Lee" who in 1993 went to a crumbling prep school and became the tost of the school until it was discovered that he was actually 30 and trying to get his way into being accepted into medical school. Director Jono McLeod was one of his classmates and via interviews with them and lip synced performanance by Alan Cumming as Lee he attempts to get to the bottom of it all.
Odd mix of animation and live action tells a hell of a hell of a story that kind of  leaves you scratching your head at the end. Yea, its a crazy story and it should be told but at the same time there really isn't enough here to support a feature. There is no dark revelations  or conflict. There is no real cautionary tale, I mean, hell, everyone likes "Brandon", even if they think he is a bit daft. There are just the stories of what happened and at a certain point that stops being enough. There is no reason for this to be almost two hours. At a certain point this was like a dinner guest who is really interesting but wouldn't shut up.
Worth a look for the curious but you may want to wait for streaming.
Posted by Steve Kopian at January 26, 2022