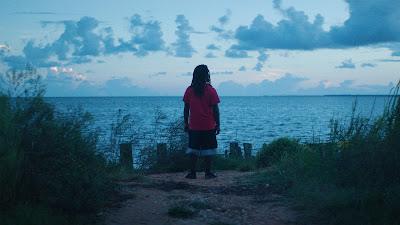 This is the story of the search  for the slave ship Clotilda. It was the last know ship to transport slaves to America. It was sailed into Mobile Alabama and up the river where it was offloaded and then burned.  The Africatown residents in Mobile, Alabama, are the descendants of the slaves on the ship and have fought to keep their tale alive.
This is going to be brief, because several days after seeing DESCENDANT I am still trying to parse it all out. I say tht because this is a really dense film. Containing more information than four or five other docs this is a film that covers the story of the Clotilda, the surivors, Zora Neal Hurston (she wrote about the story), the racism that that kept the story hidden, life in Africatown, the search for the ship, the discovery, the feelings of the descendants of all the people involved, the notion of reperations, plus the battle for the families to control the story. Any one of those threads could have been a film itself but its all here. More importantly its presented well enough that we havea great deal to chew on.
I absolutely loved this film. It feels more like a really good book than your typical documentary.
Highly recommended DESCENDANT is a must.
Posted by Steve Kopian at January 26, 2022