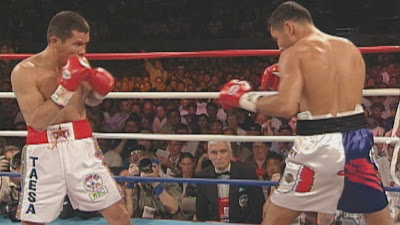 This is a Dazn produced documentary about the 1996 fight that happened when Oscar De La Hoya challenged Julio César Chávez for the championship.
This is a good, if very by the numbers look at the fight that changed the boxing world as Mexican American De Le Hoya fought Mexican Chanvez and rocked the world. It wasa fight that split the Mexican boxing community into Mexican and American as opposed to one banded together community with a love of the fights. Its also the story of the coming back together of the community as well.
The film also takes time to explain the life and careers of both fighters, with a slight preference for De La Hoya who has connctions to the network.
As I said this is a very good film, which unfortunately is premiering   at the Sundance film festival where is is suffering by comparrison. That said I am looking forward to seeing this again.
Highly recommended for doxing fans.
Posted by Steve Kopian at January 22, 2022