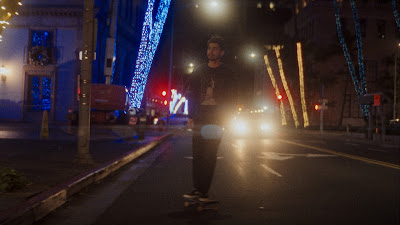 Part documentary and part narrative. EVERY DAY was put in motion when lead actor Naz Kawakami  notified director Alika Tengan that he was moving from Hawaii and going to New York they then crafted a film that revealed what it was like to give up everything and move nominally half way around the world.

This is a low key slice of life. It’s a very real feeling look at what its like to give up everything you know and then move. It neatly explores all of the complications that might arise. I know I said at the top that the film was partly a documentary, but going in I didn’t realize it. I went in thinking it was simply a narrative, but the sequences didn’t feel staged. The conversations seemed real and I wasn’t sure if this was made up or not. It wasn’t until I was a good way into the film that I realized this was a narrative, and yet it still felt too real to be made up. I was delighted because its so rare that a film comes across as this real. I say that having seen way too many documentaries that were “true” but still managed to feel made up.

While some people may not like the low key and very real nature of the film, no doubt they will claim its too slow or not much happens,  those willing to go with it will find EVERY DAY  to be a small gem of a film