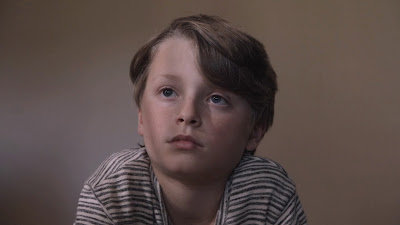 The life of a young boy and his family as seen through moments in time and objects.

Told largely with voice over narration from an all knowing observer over sequences that are arranged to look like photographs, this is a film that is either going to thrill you or bore you to tears. How you react is going to depend upon you tolerance for art house cinema and cinema that spells it all out for you.

My tolerance for the film ran out of steam early when I realized that the narration was going to be sticking around for the whole film, I wouldn't have minded, except that the whole film is essentially in the narration with all the details coming from what we hear. There is no room for character development or any sense of life and the film quickly withers and dies as we are force fed everything.

Even the images are carefully selected and perfectly posed as if they mean something but they rarely connect to anything we are hearing. While I understand a director is the one to pick what's important and direct our gaze, but here its not always clear why we are being directed this way.. I personally felt no connection to anyone or anything on screen even as I picked out the filming locations from various haunts close to where I live.

To be fair the film is well made and well acted, which counts for something, but it's emotionally dead, even if we occasionally feel something. Its like how we feel for a child's stuffed animal  because we create fantasy back story for it, but the truth is the emotion is false since the stuffed animal has no real life of its own and doesn't move or feel, even a little bit. This film is like that stuffed animal.

A miss destined to play for the rest of the year at the more pretentious of film festivals before fading into oblivion.