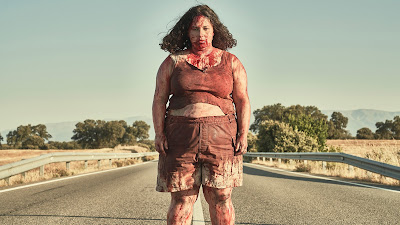 Laura Galán will probably be come an interntional star after people see PIGGY because she give the role everything and then some. Truthfully if Oscar noticed films like this she would be a front runner, but the Academy never does, so her Oscar will not doubt come for some other, lesser performance.
I probably should say this but PIGGY made me laugh (probably for the wrong reasons). This tale of Sara, a heavy girl who ends up tied to the crimes of a serial killer, struck me as exceedingly funny. The reason for my chuckling was that everything was so over done. For me it played like an uncomfortable comedy where lots of bad things happened and lot of blood flowed.
While I admire Laura Galán's work, I have to wonder if writer Carlotta Pereda likes the character. She abuses the shit out of Sara and has her running around in such away that she always seems to be on the verge of being completely naked both physically and emotionally. It never struck as believeable because she is always pushed to the brink and never given a respite, even for a second. What's worse the ending, which I guess is supposed to be cathartic just didn't make sense.
Then again much of this film doesn't make sense, with so much of the film seemed aimed to provoke a reaction either in the audience or the characters, with the result that some of the turns had me scratching my head-beginning with why in the hell the killer would leave a body underwater where everyone goes swiming- I mean it was clearly going to be discovered ASAP.
Yes,the film provkes a reaction, but I don't know if it does more than that. The plot doesn't make much sense and as a portrait of bullying it's so over the top and so incredibly cruel to its own character, that on it's own terms the film ends up being something that shouldn't be preaching.
Worth a look for Laura Galán's performance, I'm not too sure of the rest.
Posted by Steve Kopian at January 27, 2022