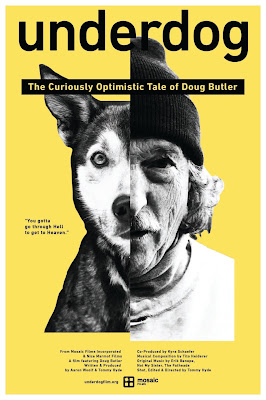 UNDERDOG is the story of Vermont Farmer Doug Butler. He is a man whose life is rapidly imploding as the bills are out pacing his ability to pay them off. Butler is always upbeat and always looking toward a brighter future. He is also looking to compete in the oldest dog sled race in America in Fairbanks Alaska. With his farm’s future in jeopardy Butler loads up his dogs and heads off to try his hand at racing.

This is a good portrait of a man just taking life as it comes. He is desperately trying to show a brave face but there are times we know that that much of his life is slipping away and that there is little he can do to stop it. Everyone wants their money and Butler can’t make it fast enough to pay off everyone with their hand out. It a sad portrait of our times, and we feel it more because we really like Butler and wish him well.

I should be honest and say that while the dog racing is thread through the film, most of the film is not focused on it, it only becomes the real focus in the last third. Its an interesting turn in a much too familiar tale of small farmers getting squashed.

To be honest I don’t know what I think of this film. While I very much like Butler, I’m not certain that there is enough here to make a feature. A huge problem is Butler is so low key and so easily rolls with the punches that there really isn’t enough conflict to make this absolutely compelling.  This is low key to the point of no key.  While none of it is bad, I mean I watched it three times, I simply don’t know why this is a feature film. Outside of showing us a really nice guy and the sled dog racing bit, there isn’t a great deal here. I suspect if this was reshaped to focus more on the racing this would have been a more compelling film.