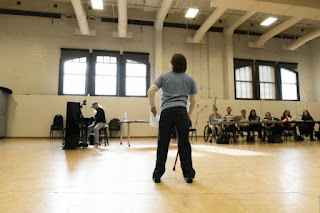 Imperfect is a winner.This is a magical film that often kicks some serious ass.
The film is the story of a production of the show Chicago using only disabled actors. We follow along as the performers prepare for the performance, deal with life and play to sellout crowds.
The reason Imperfect works is that directors Brian Malone and Regan Linton never take their eyes off the people. This isn’t about the play about the people with the result that the film packs a punch. I say this because watching the performance clips, particularly at the end are full of emotion. Seeing and hearing a smattering of The Cellblock Tango where the murderesses express their rage at the people who did them wrong takes on a different feeling as we equate the actresses lives with the words in the song. It kicked me in the chest as the rage of wronged and margianlized characters crashed into the women portraying them the look on their faces as they sang "he had it coming" banging out the time seemed cathartic
This is a stunner. It’s a great film  not only for people who love the theater but also for those who love great films.
Recommended
Posted by Steve Kopian at January 27, 2022