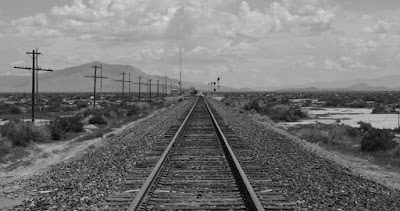 The City of New Orleans  by Steve Goodman

FERROEQUINOLOGY (the term means the study of trains) is a film that is going to suffer from not being seen on a big screen. This is a film full of amazing sights that deserve to be seen as big as possible.

This is the story of two men who love trains. Andrew Cross who chases freight trains across Nevada. McNair Evans rides Amtrack trains and documents the trips and the people taking them as he criss crosses America.

One part love story of train and one part love story of people FERROEQUINOLOGY is a special film. Its a beautiful film both visually, it was shot in gorgeous black and white, and emotionally. You get lost in the images and in the stories of the men and the people they meet. It's a wonderful trip into another place and in a sense another time.

I fell into FERROEQUINOLOGY. I sat there and drifted off and cleared my mind. I've done this several times now since I was sent the film before Christmas so I've had time to return to the film and just be. As long-time readers of Unseen Films know any time I return to a film and mention it in the review the film is something special.

FERROEQUINOLOGY is special and a very recommended film at Slamdance