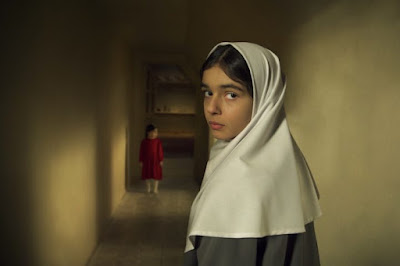 I'm not going to lie, Killing the Eunuch KHAN is narratively a mess. It has a great deal going on and after the first section I'm not sure it holds together. That said this is one of the most visually arresting films in years. It is a masterclass in the se of space and camera movements. Its such a kick in the pants visually that it is one of the must see films of Slamdance 2022.

I'm not sure what the really is plot is. The promo material says something about a serial killer using his victims to get victims and it also mentions the plot of the first section which is about a father and his two daughtrs who get caught in a bombing during the Iran Iraq War. After that some other things happen but I'm not as clear as tohow it all ties together. What the film really is is an allegory about the horrors of war, of how men in high places are killing us. Its clear that director Abed Abest has somethings to say as the river of blood in the first part of the film colors everything.

I will be forever haunted by the images in this film.Abest has created images that are now burned into my soul including the image of the river of blood filling a bomb crater. The camera movements, the use of color and the use of space all produce a visceral effect that is truly disturbing.

While I am truly in love with the craft of the film and while I can complain that the film may not hold it's narrative together, the film still packs a punch. There is a deeply visceral quality to everything that works behind our eyes in order to leave us deeply disturbed.  When I finished the film I thought I was going to sit down and toss off a few lines about the images and such but as I walked into the kitchen to get a drink I found myself disturbed. There was something about the way the film played out that left me feeling uneasy. Something about it kicked me in the chest.

I need to revisit this film referably on a really big screen where I can't look away.

Killing the Eunuch KHAN is a stunner on it's own terms and is recomended.