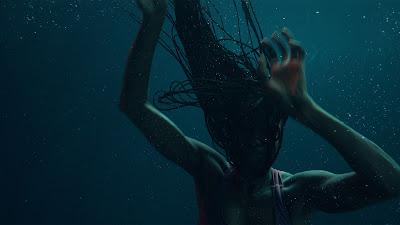 Aisha is a young mother from Senegal. She is working a a nanny for a couple in Manhattan as she puts enough money together to bring her son over. As time get close for his arrival strange things begin happening.

For what it's worth I was all in on NANNY for probably the first three quarters of the film. It was a beautifully acted (Anna Diop is incredible) acted drama that refused to be overt. Hell, the film film goes out of the way to subvert expectations and be what it is, which is a the story of a woman trying to navigate her life and the life of the people she works for.  I went all in because I cared about everyone on screen.

The problem is there is a point where the film get a bit messy. The weird stuff begins to pile up and there are a couple of turns that don't fully make sense.It feels that the script is moving things along faster than it should. (And apologies I can not explain because it would require a detailed plot discussion which I don't want to do because it will give too much away). I took a step back. I didn't disengage but I was a bit less invested.

I am happy to report that the film pulls it together in the end with an ending that is right. I mean I got to the final fade out and as like "ah yes that works nicely." It was good enough that I leaned back into the film.

Ultimately NANNY is a winner. If you can go in know it's not a big tim horror film but a small jewel of a drama with a supernatural flavoring you will be delighted.