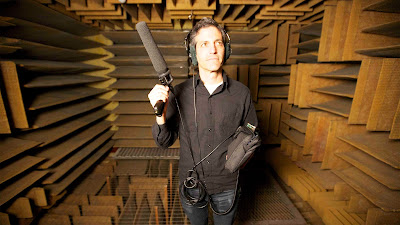 Sam Green and JD Samson take us on an exploration of why sound is so important to us, using 32 sounds to illustrate their points.

When you see 32 SOUNDS wear headphones. I can’t imagine a sound system, short of a very high end one, that will give you the real special sense headphones does. I say this as someone who watched the theatrical/home version twice and I found the headphones made the film so much better.

I don’t know what to say about this film other than see it.  I’m not saying that as ploy not to write it up but because the film is not really a film but an experience. It’s a journey you take that takes you from point A to Z with a hell of a lot of stops in between. The joy and wonder of the film is taking the trip, watching how the sounds and the stories around them build on each other. It’s a cinematic companion to the work of the theater group Complicite which use sounds and image to tell you a story that takes things to another level.

I had a blast watching it smiling and laughing as I went-which confused the people around me  since they couldn’t understand why I was verbalizing when they couldn’t hear anything.

I should also point out that there are two versions of this film- a theatrical/ home version of the film  and one that will tour with live sound. A version of the live version was done on line. I missed the Sundance show, but having seen live performances by Green I’m looking forward to seeing the film in person

Additionally there is a live performance on line on January 27 at 130pm Eastern time. Check the website for details