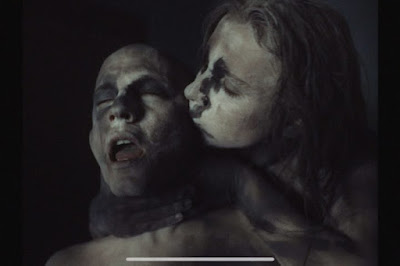 Mark Pellington's THE SEVERING is a 70 minute gut punch.  A dance film for those that like disturbing things it is a film I wish I had seen on a big screen where it's images wold have been all encompasing and inescapable.

The film is a series of dances usually by a single dancer moving to an electronic soundtrack. Its like watching some one convulse from a nightmare for an hour. There were things where I wondered how they did that only to realize that it was all the twisting body of one woman. I know that ay sound like a no duh statement, but at the same time in an age where everything is computer altered its atypical to see something as troubling as some of these images that isn't computer enhanced.

While I readily admit the film probably a little bit too long I still wouldn't cut a thing even if I knew how you can trim a dance.

Before you go vaulting into this film be aware there is a chance this may not work for you. The style of the dance has been likened to Pina Bausch who I know isn't for everyone. This is people who who want to connect with the darker side and be troubled by things other than blood and guts.

Highly recommended for those who like the experimental, dance or off Hollywood.