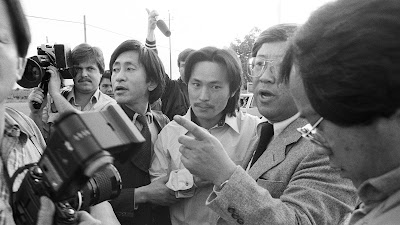 This is the story of Korean born Chol Soo Lee who was framed by the police who made him the murder suspect for a killing in San Francisco's Chinatown. Relying only on caucasian testimony they ignored all the witnesses who said he didn't do it. They also ignored the chatter in Chinatown that said "the Korean didn't do it".

An important case of racial injustice that got worse by turns, (Lee had to kill a man in prison in self defense and there were later tragedies) is given a not very good telling in a film made for PBS's Independent Lens. The issue here is that the telling in jumbled, and not clear. For example talk of a committee to help get Lee free isn't mentioned until some time in the telling. The way the film is told you have no sense that Lee has any even vague support other than the woman who is his friend- when she says that she joined the committee.  Other details are left out (any real sense of the police or their investigation) or left hanging until they are brought in in such away that I was left to wonder why we weren't told that before. I was constantly asking questions to the screen the film never adressed or addressed badly (there is almost no sense of Chinatown as a place). The result is a film that is less moving than it should be, especially in the later section of the film when we shuld be crushed by the turn of events.

I was left shaking my head.

For me the film is a major disappointment. It's clear this is an importnt story but the telling doesn't do it justice and it's under 90 minute run time doesn't help. It feels like the film was ut together by people too close to the material and checked by people just as close to the story.