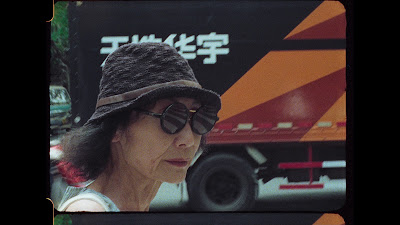 Filmmaker Christine Choy revisits an unfinished project from 1989 when she filmed the leaders of the Tiananmen Square protest after they fled China. She visits the leaders today to see where they are. Mixed into the film is a biography of Choy herself.

Okay film is in desperate need of an editor. This is a film that bounces from pillar to post as the loud and abrasive Choy's personality in the sequences focsing on her crashes into the quiet seriousness of the protest leaders. As a result the film feels unfocused. We never get a handle on what we are supposed to focus on.

Personally most of the sequences focusing on Choy alone should be removed and instead the film should just focus on the leaders. There is some incredible material there, particularly in the later portion here they look back thirty plus years. A good chunk of the Choy material has little connection to the exile thread, This isn't to say that a film couldn't or shouldn't be made about Choy, rather it's simply to day that a film called THE EXILES should be about that and not about a crazy filmmaker.