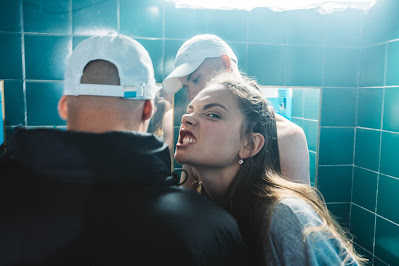 A couple of weeks and a couple of viewings on I still don’t know what I think of Love Tasting. My over riding thought was WOW. Beyond that reaction has been to just stare at the screen in awe.

Director Dawid Nickel has made a masterpiece that is alive and real with a tactile feel that has left me wondering how this can be a narrative when it feel like a documentary.

The film follows a group of teens over a week before the end of school. We are with them as they hang out, go to church, dance, smoke, pair up and deal with what life throws at them.

I have no idea where to begin talking about this film.

The cast is across the board fantastic. It never feels like anyone is acting. No matter what is going on they sell it. Even when things become intimate they are totally oblivious to the camera. The best thing I can say is that this group of kids might very well make up the greatest ensemble cast that I have ever run across. I mean I keep watching the film hoping to find some sign of them breaking character but everyone is so invested.

The plot, while occasionally melodramatic, feels real. The first time through I had stop the film to check the Slamdance site to make sure this was a narrative. The way everything spins out feels dead nuts right. The conversations feel right. The interactions feel like what should be happening.

Forgive me for not being more specific but this is a film you need to just ride along with and discover on its own terms. Doing so will make the emotion hit you harder. By the time things were wrapping up I was getting emotional with everyone’s journey and I know not having a clue how it was going to play out made it deeper.

The film is shot in such a way that it feels alive. There is style to burn. I have to appalaud Dawid Nickel for making a film that technically is magical and sucks us in and makes it look flashy while at the same time driving the narrative forward.

I also need to mention the music. The score, which is largely part of the film is perfect. Its perfectly chosen to set the mood and drive things along. One of the times through the film I sat and watched it just to listen to the score.

And yet despite knowing how good the film is I honestly don’t know what I feel about it. I don’t know if I like it. That may sound weird, but I don’t know if I can like a slice of life like this. Additionally while I was moved by the arcs of the characters I still don’t think I like everyone. I’m still wrestling with the film and my feelings despite seeing the film several times from start to finish and in pieces.  That to me is the mark of a great film.