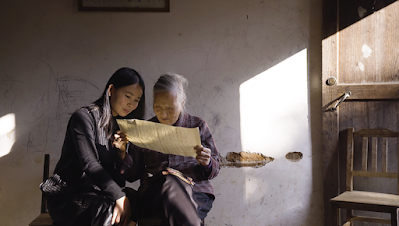 The film is the story of the language of Nushu which women in China used to communicate with each other so men didn’t know what was being said. The language was in a time when women were not taught to read and write and during the days of the patriarchy. The language is currently being codified by the Chinese government who have set up a museum and tour those who can speak and write it around the world. The film also focuses on two women who are connected to the language and are using the study to better themselves.

I am I love with the section of the film that focuses squarely on Nushu. I love the idea using a secret language to connect to other covertly. I love how the women who used it fought their repression by using a means to express themselves and their feelings. The thought of their voices  reaching other women fills me with a bittersweet joy. It shouldn’t have been like that but I love the idea that they were a little less alone.

Unfortunately I’m mixed on the rest of the film. The stories of Hu Xin works a Nushu museum guide and Simu a musician with a passion for Nushu are less compelling. I blame the director Vilet Du Feng who never manages to push the film  forward with any sense of urgency.  Du Feng gives us beautiful pictures but doesn’t seem to have control of the rambling narrative. After an interesting set up regarding Nushu the film shifts into the lives of the women and everything seems to loose traction. We learn about the women and the language seems to drift away for a while.  Sadly the women are not as interesting as the language they love.  Even the attempt to show how we haven’t moved so far since the days when Nushu flourished plays out without much emotion.

While I was disappointed, the film is still worth a look for those curious about a disappearing language.