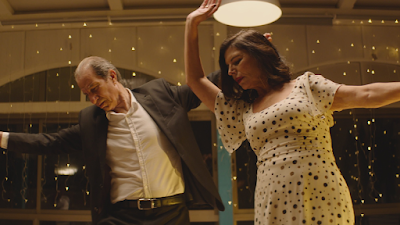 Charming comedy drama about an older couple who are stuck in a rut. When a new neighbor moves into their building he begins to re-spark their life- even as he turns everyone upside down.

This is a good little film that doesn't really do anything we haven't seen before. It works because it goes through its paces really well and because  the two leads are real enough that we fall in love with them. We connect with them wonderfully and they make the ending something moving.

And the end is moving. I love it when a good but not great film suddenly sticks the ending and you get misty. Karaoke, which is a solid if unremarkable comedy drama ends with a moving ending that is good enough that I think the film is absolutely worth taking a ride.