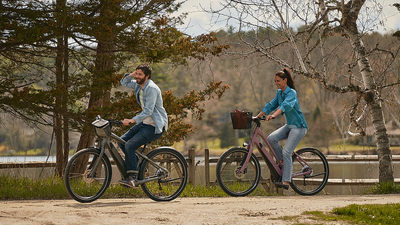 I've been purposefully avoiding any pandemic movies since they started coming out. Since I lived through it, it didn't feel like something I needed to relive so soon, but when I saw this was a romantic story, I was more interested.

Alone Together is directed, produced, and written by Katie Holmes. That is pretty impressive that she did it all! Several people told me Katie Holmes movies are generally bad, but I don't think I've seen anything she's been in since Dawson's Creek, so I didn't have anything to base it on.

Alone together is about two people, June and Charlie, who wind up in the same Airbnb by accident of it being doubled booked.  June was supposed to be there with her boyfriend, but he decided to stay in NYC to be with his family as the pandemic starts to unfold.

June and Charlie go about their routines and start getting to know each other, and an unexpected romance unfolds. I really like Jim Sturgees and I liked his character in this, he was sweet and I thought they were sweet together.

I will say hearing Andrew Cuomo talking in the background of many of the scenes was a bit cringy for me.

Also, I'm tired of seeing movies where people say they're vegan and the next day decide they want a cheeseburger again. This film sort of felt like an ad for McDonalds with how much it was shown in it.

I've seen a lot of reviews trashing this movie, but while it can be a bit bland, I liked June and Charlie. I thought they were sweet, and it did make me tear up. I would say the film is Netflix-worthy, but wouldn't say you should pay to see it on the big screen.