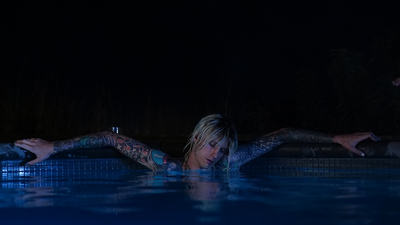 An all too familiar story of the rise and fall of a musician takes center stage at Tribeca 2022. TAURUS stars Colson Baker as a talented rapper battling addiction and the industry’s ownership of his brand.

If you’ve got a sharp ear, TAURUS opens with the melody from “Eyes On Fire” by Blue Foundation. That single track becomes a theme that appears throughout the film. The reworking of the original track makes it feel like a horror soundtrack. The lyrics of that song profoundly linked to every part of this story.

Maddie Hasson as Ilana is electric. As his assistant, handler, babysitter, and closest confidant, she bears the brunt of his aggression and strung out misbehavior like a saint. Hasson goes toe to toe with Machine Gun Kelly’s presence, never once overshadowed. You can’t deny Colson Baker’s (Machine Gun Kelly) powerful demeanor as Cole. He fills each frame with visceral sadness, which often manifests as rage. He brings volatility that hits hard. Watching him work is like getting high. If you ingest music and art as I do, the scene in the studio will give you full-body chills. Baker is a star.

TAURUS encapsulates the hidden pain, pressure, and danger of living in the public eye. The film is outstanding. Taurus’ final take is breathtaking. Writer-director Tim Sutton has thoughtfully crafted a film that allows Baker to soar, and the film’s music, all from MKG, is spectacular. “Paper Cuts,” the track that plays over the credits, is a fucking hit, and his cover of “Girl Like You” is magic. Tribeca 2022 is the perfect place for TAURUS to shine. You’ll find yourself in a woeful state by the end, angry at the cyclical nature of the fame machine.