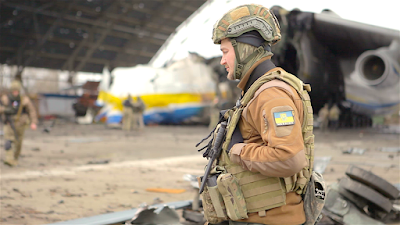 This is a look at the last ten years of Russian intervention in Ukraine and shows how the current invasion was nothing unexpected.

Focusing on a group of people over the last decade the film shows how everyone stepped up from the  uprising in 2013, on through the various clashes up today. Its a film that is very much focused on the people and we get to watch how events change them and their relationships over time.

This is a good but not great film, at least for non-Ukrainian audiences. The problem is the film is so focused on the people we are following that we never fully get a full understanding of the bigger picture. I felt a little lost concerning the events that we were in the middle of.  The only time I truly felt engaged was the final section explaining where everyone is today during the present conflict.

To be fair this is a film that is caught in an unenviable position in that its a film that is about events today- but which is kind of left behind by events today. Yes we get a to see how we ended up with a war in Europe, but at the same time its a film that was clear made with a different mind set then then the mindset the directors would have today. I suspect that had I seen this film with out a war raging around the people being profiled, I would have reacted differently.  I want to revisit this film down the road when I can see it with a bit of distance and not feel its being colored by the present war in Ukraine.