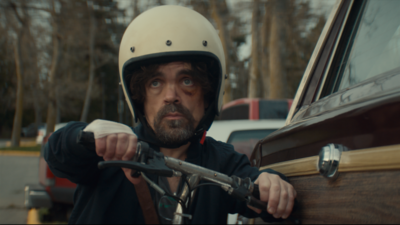 There’s something about Peter Dinklage that makes him a brilliant leading man. Tribeca 2022 film American Dreamer is another example of his ability to captivate on screen. In Paul Dektor‘s feature directorial debut, Dinklage plays adjunct social economics professor and lecturer Dr. Phil Loder. As he speaks eloquently to his students, we witness a sly Indian Jones hommage from the front row. Perusing real estate porn, as so many of us do regularly, Phil is serious about finding his slice of heaven and stability in his career. Chasing tenure and respect, he stumbles across a deal in the classifieds that seems too good to be true. With the assistance of his smarmy real estate agent, played to perfection by Matt Dillon, Phil purchases an enormous estate. But there is a catch. His contract contains a “live-in” clause for the previous owner.

Phil has sold his soul to a woman named Astrid. Thought to be on her deathbed, unpredictable circumstances lead Phil to hire a private detective (Danny Glover) while navigating a complicated relationship with Astrid and her skeptical daughter Maggie. The script dives into the mythic “American Dream” and what the concept means to each of us. Screenwriter Theodore Melfi allows MacLaine and Dinklage to do their proverbial thing. I was hypnotized by the ease of their scenes together.

Shirley MacLaine brings her truest form with sass and spitfire. Her ability to make you smirk and piss you off is a gift. She’s a legend, and Dinklage keeps pace at every turn. Peter Dinklage has mastered the art of charming his costars and the audience. After watching him in Cyrano, his sex symbol status became solidified. In American Dream, Melfi and Dektor allow him to woo in only the way Peter can woo. Picturing him as a man that constantly has women in the palm of his hand is sheer perfection. His comic timing is unmatched. The magic permeates throughout his fully fleshed-out portrayal of a flawed man.

American Dreamer wins with a great score and soundtrack, stunning locations, funny fantasy sequences, and some clever transitions in the form of novel chapters. I had no idea where this plot was going, and damnit, that’s rare. It is easy to say that it is one of my Top 3 films from the festival this year. I cannot wait for larger audiences to experience this beguiling comedy when it inevitably gets distribution. You’re gonna love it.