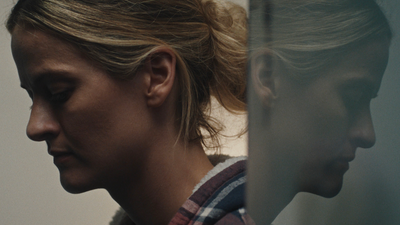 Writer-director Tyler Riggs brings one of the most relevant and heart-wrenching films to Tribeca 2022 in Peace In The Valley. Ashley and her son are survivors of a mass shooting at a grocery store. Ashley’s husband sacrificed himself to save the other shoppers. The aftermath is a complex look into grief and gun culture.

William Samiri brings innocence, curiosity, and a genuine longing for a male father figure to the role of Jesse. Playing identical twin brothers John and Billy, Michael Abbot Jr. is no stranger to this subject matter. He starred in Vincent Grashaw‘s gut-wrenching film And Then I Go in 2017. These two films are quite the companion pieces. Abbott Jr. plays John as calm and respectable. As Billy, he emits a country roughness that keeps you on edge. Countered with well-meaning attention for Jesse and Ashley, it is a fantastic showcase for him. Brit Shaw is extraordinary in this role. The physical manifestation of grief is palpable in her performance. Her attempts at normalcy through staying busy and distractions translate universally. It’s messy and cathartic, and she nails every beat.

The camera work is noteworthy. You’re on a dizzying emotional ride with these characters, and the handheld cinematography forces the audience to stay present. The score has a melancholy twang that sticks in your brain. There is no manual on how to deal with grief. Peace In The Valley is a film that will connect with a broad audience. We’re all living through this national nightmare daily. For those who turn s blind eye, Peace In The Valley is a reminder of the continued trauma. We have to do something to heal and feel safe again.

For more from Liz Whittemore go to Reel News Daily