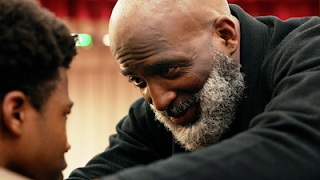 When I walked out of the press screening of the award winning CAVE OF ADULLAM I ran into the film’s publicist who wanted to know my reaction. I tried to push past her because I had some crying to do, and I told her as much. She was a bit confused until she saw my red puffy eyes and realized that I really was crying. Her eyes went wide and she stepped aside so I could go off and get a tissue.

Simply put I THE CAVE OF ADULAM is a deeply moving and hopeful film about Jason Wilson who runs a group for at risk young men of color with the name of the film. The idea is not so much to teach the boys discipline  but to teach them the skills that will allow them to survive and thrive instead of fall between the cracks and get lost.  The group is based on physical improvement, philosophical teachings and basic life skills. In order to progress you not only need to learn philosophy and martial arts but basic things like how to set a table. The boys fall into it thanks to Wilson who acts a surrogate father. He doesn’t give lip service to the boys, but is genuinely there. For example he goes with one young man to see his father in prison. Wilson wants to correct his past wrongs and set the next generation on the right path.

This is a film that is some where beyond words. A work of incredible power, the film shows that things can be different if only kids got a little genuine guidance and love. Its simply a matter of caring that changes things up. I can’t believe that more people are not taking Wilson‘s example and setting up similar centers.

I was rocked to my core. This is film that reflects a life that is so alive and hopeful that I never wanted it to end.

One of the best and most important films of 2022. It will make you feel good for all the right reasons.