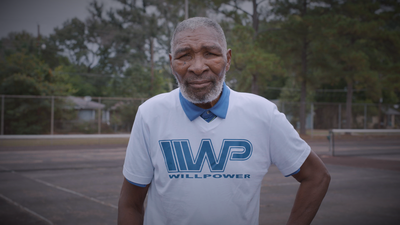 In light of the Oscar winning KING RICHARD, where Will Smith played Richard Williams, the father of superstars Venus and Serena, I was very curious how a whole documentary on the man would play. I was never a fan of Smith's Oscar winning performance since it didn't seem to show how smart Williams really is. Having seen ON THE LINE, I never want to see the Smith film again.

Using a combination of talking heads and copious film and video from over the decades, ON THE LINE paints a very complex portrait of the man. Its a portrait that truly reveals just how much of a genius Williams really was. More  importantly you really get a sense as to why everyone he encountered put up with some of the crazy things he insisted happen for his daughters.  Watching the film I was constantly having "ah ha" moments as details that were left out of the earlier film were brought up. While I'm still not sure I like Williams, I most certainly respect what he did because I at long last understand what that was.

This is a really good documentary. Its one of those great ones where it takes a subject you think you know and shows you you don't know anything. Its good enough that even though I don't know how I feel about the man I want to see the film again because its so good.