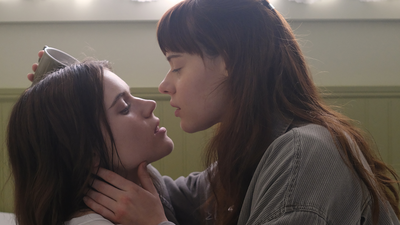 n You Can Live Forever, Jamie is temporarily living with her aunt and uncle who are devout Jehovah's Witnesses. They make her go to church(or meetings as they call it) where she befriends Marika. Jamie and Marika wind up spending a lot of time together which gradually turns into them being more than just friends. Of course, because of religion, they have to be together in secret.

I was very unfamiliar/really knew nothing about Jehovah's Witnesses prior to watching this, and it made me wonder; are all Jehovah's Witnesses really strange in real life, like the people in the movie were?  Maybe that comment is ignorant, but they really seemed peculiar. Or maybe I just view them as strange because of how removed I am from it and any religion in general. (I read that the director was raised in a Jehovah's Witness community, so I assume the characters are an accurate portrayal)

I really liked Jamie's character, but Marika was a bit off for me, but it can just be because of her family and the way she was raised. I really loved the friendship between Jamie and Nathan. I was happy she had a nice and "normal" friend who supported her and who she could be herself with and talk to.

This movie was good! I found it educational, moving, and also heartbreaking. Definitely made me cry. A good coming-of-age movie that I would love a sequel to!