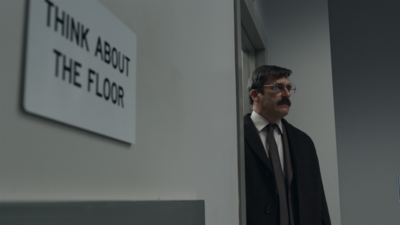 A Kafkaesque story about a corporate worker bee who prides himself on productivity and efficiency discovers an office no one else seems to notice. Jon Hamm plays Orson, a man who feels misunderstood and underestimated. As he isolates himself from his co-workers due to his holier-than-thou inner monologue, which Hamm provides with his iconic tone of voice, he finds respite in a wood-paneled, impeccably decorated, midcentury modern office space. Just down the hall, between the elevator and the restroom, lies a door to that room. Orson’s visits to the office slowly increase. The problem is that when he does, everyone around him sees something altogether different. They see Orson staring off into space, never moving, as if in a trance.

The audience must decern whether Orson is quite well. Ted Kupper‘s adaptation of Jonas Karlsson‘s short story allows us to go on the emotional journey from Hamm’s standpoint. I use the term “emotional” loosely, as Orson is almost robotic and socially inept. Hamm gives a performance that will undoubtedly be buzzing through awards season. It’s a departure from his sexy manwhore persona from Mad Men, even if Orson’s coveted space would have been Don Draper’s wet dream. It’s no coincidence that the building is a monstrous and overbearing piece of architecture that literally disappears into the clouds and that the company name is “The Authority.” We’re not exactly sure what Orson’s job title is, but when inspiration hits him inside “The room,” he impresses the higher-ups, including the never-seen “EVP.”

Despite the praise, Orson’s co-workers and bosses cannot emotionally manage his request to work in the room. The film begs the larger question about neurodivergence in the world. On a personal note, as a parent of a child with Asperger’s Syndrome, Corner Office can connect with audiences for innumerable reasons, whether intended or not. Corner Office is a unique entry into the mental health conversation. The script strings the audience along until the very end. It was, without hesitation, one of my favorite films from Tribeca 2022.